In windows 7 you can pin your favorite programs to the taskbar for quick access. But some programs are missing the “Pin this program to the taskbar” option in the context menu when you right-click the icon in the taskbar. 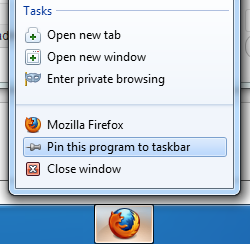 There are two reason I found out about that could cause this behavior:

In a default environment the key contains:

For years, you’ve seen Tom Moreau solve many T-SQL problems, eschewing such ugly approaches as temp tables, their table variable cousins, andworse yetcursors. This month, Tom makes a concession, showing that the exception proves the rule. Along the way, he shows you how to create what amounts to an index on a table variable. Very cool.

As you know, I enjoy receiving e-mail from you, particularly when you provide me with a challenging T-SQL problem or one that makes me dig in and learn something new. This month’s “best question” award comes from UK-based Dr. Graham Smith.

&#9;Graham has a table that looks and feels a lot like the Orders table in Northwind, so we’ll use it for our discussion. Graham needs to build a stored proc that takes the EmployeeID as an input parameter and returns a rowset with the OrderID, RequiredDate, and ShippedDate of all orders for that EmployeeID. However, the orders need to be sorted by RequiredDateand he also needs to generate a sequence number. Graham tried using a SELECT INTO in conjunction with an IDENTITY column, but that approach errored out, since the OrderID itself is also an IDENTITY, and you can’t have two identities in the same table. More about that later.

&#9;Doing running counts or running totals via a correlated subquery in the SELECT list is fairly straightforward in T-SQL, as I’ve shown in a number of columns, so let’s start there. Take a look at Listing 1and Table 1.

&#9;This does a scan count of 44once through the table to pick up the rows for EmployeeID 9, and then 43 more times to calculate the sequence number, once for every row in the result set. But it gets worse: 4,007 logical reads. Wouldn’t it be nice to ease the burden on the Orders table somewhat?

&#9;If you had many orders and many employees, then the percentage of orders for a given employee would be quite low. With an index on EmployeeID, you should be able to get the rows you need for your result set fairly quickly. It’s the sequence number thing that’s dragging us down.

&#9;Longtime subscribers know that I’m not a huge fan of temp tables, but let me clarify my position: I only don’t like them when they’re not necessary. They do, however, earn their keep when your query has to do the same thing more than once. In those cases, it’s better to take the hit once and just refer to yourmuch smallertemp table as many times as you need. One more thingSQL Server 2000 allows you to use table variables, and they have proven in many cases to outperform your basic temp table. [BOL points out that table variables, which behave like local variables, offer several advantages: They have well-defined scopes, they're cleaned up automatically at the end of the function, stored proc, or batch in which they're defined, and they tend to result in fewer recompilations and less locking in stored procs and transactions where they're used.Ed.]

&#9;Listing 2 shows you an alternative solution, using a table variable. It gets populated with the required rows and columns (sans sequence number). The correlated subquery then gets applied to it. Check out the code.

&#9;This doesn’t just help with respect to the instance of @t (o2) used inside the subquery, it also helps with the instance (o1) outside the subquery. The subquery can tap the UNIQUE constraint twice and then do a Bookmark Lookup to pick up the remaining columns for o1. Listing 3 shows the revised DECLARE for @t. (The SELECT is the same as Listing 2 and isn’t shown.)

&#9;Populating this version of table variable @t yields the same scan count and logical reads as before. However, the logical reads jump up to 132 for @t, since it has to populate not only the clustered index on the PRIMARY KEY constraint, but also the nonclustered index on the UNIQUE constraint. The final SELECT yielded a scan count of 87, with 173 logical reads. That looks like bad news. However, the query cost of Listing 3 dropped to 0.0693, suggesting that the saving was in CPU.

Listing 4. Clustering on the UNIQUE constraint.

&#9;This time, you get one more logical read and a very slight drop in query cost to 0.0693. Of course, I decided to time the solutions and see who the real winner would besee Table 2.

&#9;Each test ran over 100 iterations, purging the data cache via DBCC DROPCLEANBUFFERS each time. All three table variable solutions were 3X faster than the original query. Indeed, the average durations rivaled their own standard deviations. It appears that clustering on the UNIQUE constraint cost a bit relative to the other two table variable techniques.

&#9;Let’s get back to Graham’s original error. He wanted to do a SELECT INTO and got blindsided by the apparent double identities and didn’t really want OrderID to remain an identity in his temp table anyway. Listing 5 shows how to counteract that problem by using CAST().

Listing 5. Eliminating the identity property in a SELECT INTO.

&#9;A word of caution, though: There’s no guarantee that the IDENTITY() function will coordinate with the other columnseven if you specify an ORDER BY. Therefore, this isn’t a reliable solution to Graham’s problem. See KB 273586, “INF: How the IDENTITY Function Behaves When It Is Used in SELECT INTO Queries That Have an ORDER BY Clause and a TOP Operator or a SET ROWCOUNT Statement,” for the details.

&#9;With SQL Server 2005 coming up on the horizon, I’d be remiss if I didn’t let you in on a new T-SQL feature that would make this type of problem far less work for you, the coder. Check out Listing 6and make sure you’re sitting down.

&#9;How long have you been waiting for that one, eh? You’ll also find that it will outperform all of the approaches you saw earlier.

&#9;Let me conclude by saying that, although this was a fun exercise, sequence numbers really belong in the client codespecifically, the presentation layer. Doing the work there takes the load off of SQL Server and spreads it over hundreds, thousands, or perhaps even millions of machinesand that’s the way it ought to be. Thanks for this one, Graham. Now, I think I’ll look for that remote. See you next month.

To find out more about SQL Server Professional and Pinnacle Publishing, visit their Web site at http://www.pinpub.com/

Note: This is not a Microsoft Corporation Web site. Microsoft is not responsible for its content.

What’s this fuss about true randomness?

Perhaps you have wondered how predictable machines like computers can generate randomness. In reality, most random numbers used in computer programs are pseudo-random, which means they are a generated in a predictable fashion using a mathematical formula. This is fine for many purposes, but it may not be random in the way you expect if you’re used to dice rolls and lottery drawings.

RANDOM.ORG offers true random numbers to anyone on the Internet. The randomness comes from atmospheric noise, which for many purposes is better than the pseudo-random number algorithms typically used in computer programs. People use RANDOM.ORG for holding drawings, lotteries and sweepstakes, to drive games and gambling sites, for scientific applications and for art and music. The service has existed since 1998 and was built and is being operated by Mads Haahr of the School of Computer Science and Statistics at Trinity College, Dublin in Ireland.

As of today, RANDOM.ORG has generated 1,096 billion random bits for the Internet community.

The Hot Chocolate Effect also known as the Allassonic Effect is a phenomenon of wave mechanics first documented in 1982 by Frank Crawford, where the pitch heard from tapping a cup of hot liquid rises after the addition of a soluble powder. It typically arises in the making of hot chocolate or instant coffee, but also occurs in other situations such as adding salt to supersaturated hot water or cold beer.

It can be observed by pouring hot milk into a mug, stirring in chocolate powder, and tapping the bottom of the mug with a spoon while the milk is still in motion. The pitch of the taps will increase progressively with no relation to the speed or force of tapping. Subsequent stirring will gradually decrease the pitch again.

The phenomenon is explained by the effect of bubble density on the speed of sound in the liquid. The note heard is the frequency of a standing wave where a quarter wavelength is the distance between the base of the mug and the liquid surface.

This frequency f is equal to the speed v of the wave divided by four times the height of the water column h:

Oh, no. My TortoiseSVN overlays are missing

It’s a matter of time. Good were the days when almost no application knew how to put overlays on your file icons in Explorer. These days it seems this is the coolest thing ever and virtually all file system type of utilities want to add their own.

Sooner or later you will install some utility and not notice anything different. But after the next reboot, poof, your TortoiseSVN overlays are gone. And, depending on how much time elapsed between the utility installation and that reboot, you may not have the slightest clue of what happened. Reinstalling TSVN won’t fix it

I should not blame these applications for a Windows shell limitation. To be fair, TSVN is the greater offender of them all.

It seems that the shell only supports 15 different icon overlays and TSVN creates 9 of those. After 15 the shell starts ignoring the extra ones. The trick is that Windows chooses the first 15 alphabetically from their entries in the system registry.

The fix is rather obvious; just make sure the overlays you want to be active are registered alphabetically before the ones you can live without.

Open the registry editor and go to HKLM\SOFTWARE\Microsoft\Windows\CurrentVersion\Explorer\ShellIconOverlayIdentifiers and look at all the child keys in there. It will be obvious that, if you want to preserve the TSVN overlays like me, you need to keep the ones starting with Tortoise* before the other ones.

If you look at the image below you’ll see that I changed my entries by prefixing the undesirable ones with z_, following someone else’s suggestion.

After that change you just need to kill and restart explorer.exe using Task Manager (or logoff or reboot the machine depending on your tolerance to pain.)

I believe this is a common problem so I hope this tip helps somebody.

via Oh, no. My TortoiseSVN overlays are missing – Sergio Pereira – Devlicio.us – Just the Tasty Bits.